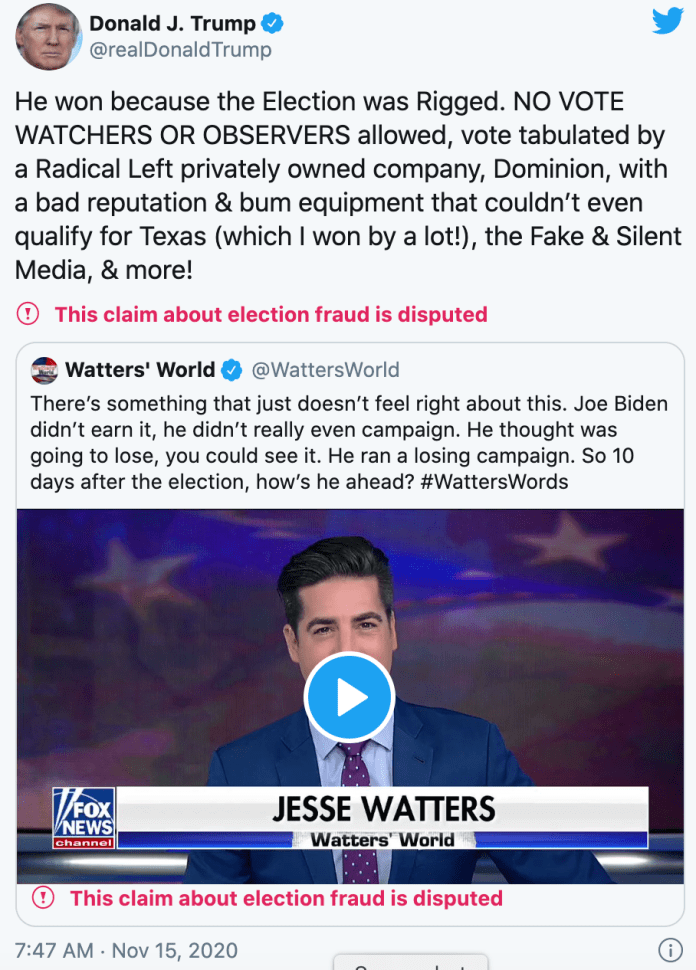 And even though the president tried desperately to take back the words, deleting the post and instead tweeting “RIGGED ELECTION. WE WILL WIN!” in the eyes of many Twitter users, it was too late.  xHe only won in the eyes of the FAKE NEWS MEDIA. I concede NOTHING! We have a long way to go. This was a RIGGED ELECTION!— Donald J. Trump (@realDonaldTrump) November 15, 2020- Advertisement – Let me say it again for the people with the cheap seats: Trump led us into a pandemic leading to more than 245,400 deaths. The racist-in-chief can claim as many times as he wants that a brief election results error in one Michigan county somehow equated to millions of faulty ballots, but the simple truth is that Dominion Voting Systems, the election tech company linked to the error, didn’t trigger school closings throughout the country or send wide swaths of the American population into quarantine. The president’s mismanagement of the coronavirus did.RELATED: COVID-19 news: One-half of U.S. deaths could have been avoided; still no mask for Donald RELATED: Researchers attribute at least 700 deaths directly to Trump’s disease-ridden rallies- Advertisement – CNN’s Jake Tapper tweeted: “Everything after ‘He won’ is a lie. But those first two words are accurate!” Writer Frederick Joseph tweeted: “He had me at ‘He won…’” And in answering screenwriter and former Republican David Weissman’s question asking why Trump even wants a job he doesn’t do, blogger Jeff Shuey summarized the exiting president’s time in office. “He never wanted the job. He just wanted the perks. He’s golfed over 300 days. #TrumpConceded by failing … again. He is a failed @potus He is a failed human,” Shuey tweeted.xTrump conceded to Biden.This is the morning he finally surrendered in defeat, via tweet, of course. He admitted he lost the election with two ostensibly simple words:He won. An inane retraction followed an hour later. #TrumpConceded pic.twitter.com/1CVWsW8nkW— Stephanie Kennedy (@WordswithSteph) November 15, 2020Fox News commentator Jesse Watters, of the show “Watters World,” obviously begs to differ as evidenced in video Trump included with his perceived concession tweet. Apparently missing the part when Trump led us into a pandemic leading to more than 245,400 deaths, Watters said something “just doesn’t feel right” about Biden being president. “Joe Biden didn’t earn it. He didn’t really even campaign. He thought he was going to lose. You could see it. He ran a losing campaign. So 10 days after the election, how’s he ahead,” Watters asked.- Advertisement – The Georgia run-off is January 5th. Request an absentee ballot by Nov. 18. Early in-person voting starts Dec. 14. And REGISTER TO VOTE here by Dec. 7.And give $3 right now to rip the Senate majority from Mitch McConnell’s cold dead hands. – Advertisement –